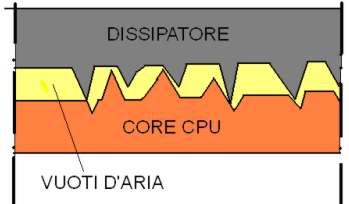 FIGURE 1.
(The contact among two surfaces is not deprive of irregularity).

The thermal interface material is used for filling the hollow of air, and it increases the thermal conductivity of the system decreasing the possibility of overheating of the processor.

What do they mean the two terms thermal resistance and thermal conductivity?

For first thing we define THE CONCEPT OF HEAT as a greatness that represents the effect of the iteration among two masses that exchange energy because of their difference of temperature.

Then we speak of three different mechanisms of transmission of the Heat:

1) Conduction.
The heat is propagated without macroscopic movement of the subject, the transport realizes him through the increase of the middle speed of the particles, resulting in an exchange of kinetic energy between atoms and molecules.

2) Convection.
Is the mechanism with which the heat is propagated through the movement of macroscopic parts of the subject in the fluid state. The cause of the motion is really the local unbalance of temperature, in fact the warmest zones dilate him and it decrease their density in comparison to the cold zones, this it provokes upward a resultant strength.

3) Radiation.
The propagation of the heat happens through so that electromagnetic. This ownership exists both in presence and in absence of subject.