What the elements that compose the thermal interface material?

There are two types of thermal interface material, that formed from Composed Siliconici (oil or fat inorganic siliconico) and that constituted from Composed Synthetic (not siliconici). The two can be amalgamate with metals, metallic oxides and the mixture that it derives of it is characterized by a high thermal conductivity.

In commerce numerous products exist, but those best are projected and developed by an American firm the ARTIC SILVER.
Two the candidates of success, the thermal interface ARTIC SILVER and the thermal interface ARTIC Allumina. The first one contains silver pulverized in particles and is characterized by a thermal conductivity of 9,0 W/m°K, the second is composed from aluminum pulverized in a mixture of polysynthetic oils, and it possesses a thermal conductivity of 4,0 W/m°Ks. Particularly, the Alumina possesses by and large the characteristics conductivity after 36 hours from the layout, because of the dimensions of the aluminum particles. The two represents the top of the thermal interfaces material, they are not carcinogenic, they don't pollute, they are not conductive or inflammable, therefore you can use its without any precaution.
If you use the ARTIC SILVER or the ARTIC Allumina, the temperature of your cpu will decrease of 3-5 centigrade degrees.

In the following chart they are present the values of thermal conductivity, and of thermal resistance of some materials.

CHART A.
(Material of thermal interface).

From the chart A results that the best thermal interface is the High Performance Thermal Compound with a value of 0.07 inches to the picture x °C/W and a thermal conductivity of 0.030 W/inches x °C.

SOME OBSERVATIONS.
Some manufacturing ones of systems of cooling, and recently also Intel, has applied a thermal pad on the inferior surface of the heatsink. From some tests, we have realized there that the thermal pad increased to blame, the value of thermal resistance of the system of dissipation, decreasing so the ability to exchange heat with the air of the cabinet (v. figure 3). We don't know for what motive is adopted such solutions, but surely our tests, and your reflections have brought in the correct direction. 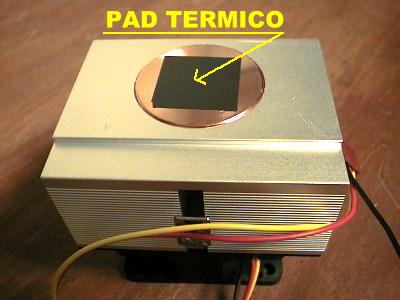 FIGURE 3.
(The thermal Pad increases the value of the thermal resistance).

CONCLUSIONS.
Surely to use a good thermal interface material is important, it increases the longevity of the cpu, and it favors a good thermal flow of the heat, but it doesn't compensate the error of an a little efficient heatsink. Then, the purchase of such a product is justified only in the cases in which an extreme overclock is faced, to the search of the maximum thermal dissipation and not in the cases in which the system of cooling (heatsink + fan) it is insufficient.

For a discussion more deepened you write in the forum of Megaoverclock. (http://www.megaoverclock.it/megaforum). If, you want to add some tests of verification instead than tells this intervention you write to webmaster@megaoverclock.it.